Simone Atangana Bekono (1991) graduated in 2016 from Creative Writing ArtEZ, having finished her bundle of poems and letters titled How the first sparks were visible, which was republished by Wintertuin publishers in collaboration with Lebowski publishers. She has been published by De Optimist, Samplekanon, and in De Gids. She has read her work at the Night of Poetry, Read My World, the Wintertuin Festival and many other events. Simone was selected for the Slow Writing Lab, a project by the Dutch Foundation for Literature, and for CELA, an artist residency for writers and translators in six European countries. One of her stories appeared in Zwart, an anthology featuring African-European literature from the lowlands. In 2018, how the first sparks were visible won the Poetry Debut Prize, Aan Zee, and Simone participated in Flemish-Dutch Huis deBuren's Paris-based artist residency. During the entire year of 2019 she will be writer in residence at Vooruit (Gent, Belgium). In the same year she received the Charlotte Köhler Stipendium for poetry. Currently, she is working on a novel, soon to be published by Lebowski Publishers, in collaboration with Production House De Nieuwe Oost | Wintertuin. 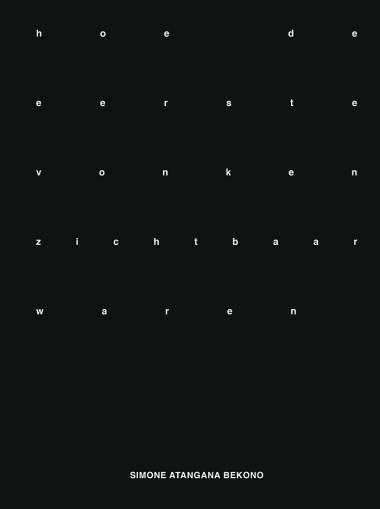 how the first sparks were visible