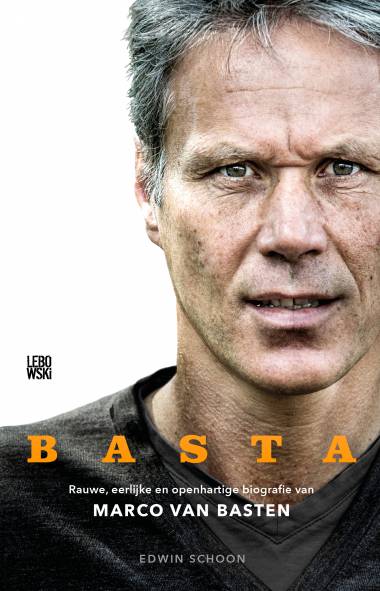 ‘I feel the time is ripe to tell my story, my truth, the one that I've never told before. I won't spare anyone either, certainly not myself.’

Marco van Basten (Utrecht, 1964) is recognized worldwide as one of the best footballers of all time. He was elected European Player of the Year three times (1988, 1989 and 1992), World Player of the Year twice (1988, 1992) and also won numerous major prizes as a player at Ajax and AC Milan: several national titles, the European Cup twice, once the UEFA Cup, two FIFA Club World Cups and the UEFA Super Cup. In 1988 he became European Champion with the Dutch national team. The goal Van Basten scored in the final is still considered by football fans to be one of the most memorable goals of all time.

I can still win this game. It is only the beginning and you haven't seen anything. The roaring applause of 80,000 tifosiand yet it feels quiet.   I can hear my name being chanted and I see the banners. I stop walking and clapping. The round is over. And something has changed, something fundamental. Football is my life. I have lost my life. Today I died as a football player. I'm a guest here, at my own funeral.’

In 1995 Marco van Basten officially said goodbye as a football player at the age of thirty. By then he hadn't played for AC Milan for over two years, because of a persistent ankle injury he had sustained ten years earlier. An injury that he fought against for years, went to extremes for, far beyond the pain threshold, in the hope of recovery, in the hope of one day being able to play at the top of his abilities again.

After his farewell as a football player, Van Basten took a backseat for years, retreating as a public figure to focuses mainly on golf. He had never been fond of the attention, the press, interviews, being the centre of attention, but now that he no longer plays a significant role as a footballer, the disappointment and frustration is greater than ever. Disappointment about a career that has not come to fruition, incomprehension and anger about his medical treatment, the failure of doctors, his own role in his career. What is left of you when you are no longer the person you were for years, a footballer, the best footballer in the world?

Eight years after his withdrawal from football, in 2003, Van Basten followed a training course and successively became manager of Ajax 2, the Dutch national team and again Ajax. In May 2009, after a match for the end of the season, he quit. The experience left him feeling disappointed, stressed and powerless. He is a winner without victories. He doesn't think he's good enough.

Despite his worldwide fame, Marco van Basten has always remained a mystery, an enigma, someone who kept his cards close to his chest. Intelligent certainly, analytically brilliant, eloquent, the guy next door, but seemingly unmoved.

In Basta, he proves the opposite. A comprehensive, raw, honest, and above all revealing book about his life: his youth, the complicated relationship with his parents, his own family, his career – the madness in Italy, the Euro 1988 – his relationship with Johan Cruijff, the painful story of his ankle, unimaginable financial setbacks, countless highs and lows.

In Marco van Basten’s world, there are no half measures, no corners are being cut, there’s nothing else but the truth, no matter how hard it may be at times, especially for himself.

‘Only recently have I started feeling more at peace. I realize that I've really been through quite a lot and I never really wanted to look back, until now.. For the first time, I also have the feeling that I have something to say, something that might be interesting to others. Maybe it's age. Maybe it's because I quit football. I don't know.’

What a book! From page one on, a lump in my throat. Open-hearted, self-confident, hard and yet elegant.

The tragedy of a deity being punished for its commitment is so well recorded. Fantastic, beautiful, romantic – and tragic too. This book made me cry.

A wonderful balance of anecdotes, love, death and lots of football. An ode to life.

Raw and blunt. Without any fancy writing, straightforward. Congratulations. What a great book.

Marco speaks out, and how! A raw and frank book.

In BASTA, Van Basten is a man who analyses his life openly and meticulously. Never before has Van Basten been so candid.

Marco's merciless self-judgment and hard analysis of the football world that was his, make BASTA one of the best Dutch sports books of the last five years.

Read BASTA and you get a more nuanced picture of Marco van Basten. As a football pro he looked confident, as a patient he was close to despair and as a coach he doubted everything. He only showed killer instinct on the pitch. In typical Van Basten vernacular, he speaks honestly about this in this book, which reads credibly for this reason alone.

Other territories via Lebowski
E: oscar.vangelderen@lebowskipublishers.nl